Day. Nine. Nine days without baseball. Nine! That’s two entire days longer than a week! Recent studies question the canonical stages of grief based on the, very sound if you ask me, notion that we all grieve in such different ways that assigning set stages, even with the understanding that people may progress through them differently, is ludicrous. Besides, I’m not entirely certain that they would have applied to grief from baseball loss anyway.

Regardless I think it’s safe to say that what I am experiencing right now is denial, channel surfing for a substitute and then trying to behave as though that substitute were the real thing. The MLB All-Stars vs. Taiwan games. The Arizona Fall League. Heck, I’m even watching the darned awards shows on MLBN, something I would not normally be inclined to do. La la la! Look it’s still baseball. La la la…except, really, it’s not. Well, not the same anyway. *sigh*

I tried to get excited over the MLB All-Stars in Taiwan, really I did. They featured a great bunch of players and Erick Aybar, Trevor Bell, Rich Thompson and the rest of the Angels players made a strong showing for their team, but when it came right down to it, the games were only so so.

Mark Trumbo says see ya! Catcher Miguel Olivo and Plate Umpire Todd Tichenor pause to watch it go. Angels vs. Mariners, July 9, 2011. Photo by This is a very simple game...

As for the awards shows and the like, I love that Mark Trumbo won the Player’s Choice Award for AL Rookie of the Year. I’m thrilled that players all over the league saw in Trumbo the same amazing things that Angels and Angels fans have been seeing in him all season. On base percentage be damned, the kid is doing great things with his bat and with his glove. But in the end an awards show isn’t a baseball game. It’s more like a visual aid for a press release about baseball with a few fun, extended interviews included.

And the AFL Rising Stars Game? Mike Trout is clearly tired and probably should get some rest before spring training or, as I said to crack up Seth, Awww, the poor little guy’s all tuckered out. And it was a boring blow out of a game with the kind of play one would expect from rising stars who are a mix of fresh from rookie ball young players and recent rookie call-ups. No offense to the kids, but in the end I turned it off thinking I could probably get a better baseball fix watching Major League. I did. Even if it was edited in truly silly ways for basic cable.

Eh, I suppose I really am being a bit of a baby about this. I mean, existing without baseball will get easier as fall and winter wear on and Spring Training isn’t that far away, right? I mean it’s only, what? 70-ish…? *reaches for calendar* 80-something…? *begins counting on calendar* 90, 91…?! La la la! I resolve to stop counting and be in denial about this too! La la la.

On an even sillier note, if anything finally drives me from my denial it may very well be the weather. It just doesn’t winter-rainstorm-downpour in Southern California during baseball season once you get past April. Yet it was coming down hard all day Friday and all evening as we watched the game in Taiwan. Yes, rain in Southern California. Look! Photographic evidence from my very own porch: 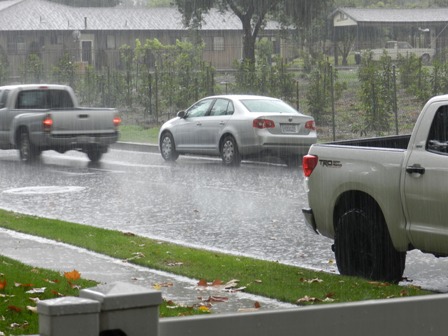 It's really starting to come down. View from my porch, November 4, 2011. Photo by This is a very simple game...

Of course then, Southern California being what it is, the weather got all gorgeous again the very next day, though when the rainy season starts in earnest this can take several days 🙂 :

But it is raining again today. Really, really.