I was eight years old when I caught gymnastics fever. It was the summer of 1984. Los Angeles hosted the Olympics. Mary Lou Retton was America’s sweetheart. And NBC must have re-aired the Nadia movie 10 times that summer. My sister and I begged and pleaded so, of course, my parents let us start lessons. The first gym wasn’t what we expected. They never let us do any real tricks, we couldn’t use the whole beam, only the part over the giant fluffy mat and we vaulted onto a large upholstered box. However they had large pit full of foam squares, just like in the Nadia movie, and a lot of the kids taking classes there were “Industry,” including the younger siblings of a then rising sitcoms and afterschool specials star with a child-of-hippies first name and a state capitol for a last name, so you’d better bet classes were expensive.

Eventually we switched to youth classes at the local community college. No Nadia pit “full of bouncy things” but plenty of encouragement to try difficult tricks at a reasonable price. And the gym in which the classes were held announced it’s more serious work ethic when you walked in the door with a large poster of a young gymnast in the middle of a giant swing on the uneven bars with her toes just brushing the floor, a major points deduction, and the saying I used for my headline: Mistakes Can Be Costly. Let’s Try to Be Accurate in Our Work.

Watching the Angels play this season, this poster comes to mind fairly often. Mind you, the team is doing well in many ways and they’re only two games out of first, even with the last two losses. But when the Angels do lose, all too often, they’ve really beat themselves with some sort of costly mistake. Walking batters, sometimes several in a row. Errors on what would have been the third out. Meatball pitches. Base running gaffes. Swinging for the fences to the point of detriment when a nice hard knock into the gap would suffice. Mental vacations at inopportune fielding moments…I could go on, but you get the general idea. 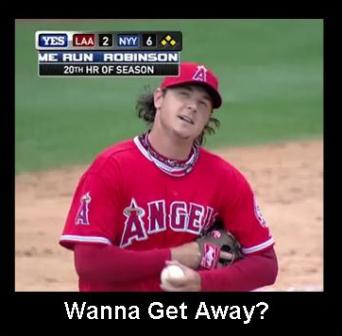 All teams have these moments, make these mistakes. But, for whatever reason, timing is not on the Angels side this season and when mistakes are made, they quickly prove costly with even greater frequency than normal. And just what can a team do to prevent this situation? Nothing, other than work harder to keep the mistakes in check. This is why I love this particular poster so much that it has stayed with me all these years. It doesn’t yell, or point fingers and it doesn’t suggest for a second that anyone can live an errorless existence. It just states a simple fact, mistakes can be costly, and suggests a valuable action plan. I’ve already seen improvements in the Angels play this season. If they can avoid more of the costly errors, mental and otherwise, in the next few weeks, I expect they will still be playing in October.

So, were there any high points we can take away from the series in the Bronx? Yes, indeedy. Dan Haren for one. He pitched most of a great game (Bringing in Fernando Rodney against Jeter with two on and two out was a moronic decision. Coaching staff, see previous conversation about mental errors.) and was an excellent mentor to young Garrett Richards, chatting him up and keeping him positive after his first game. Richards himself. Yes, he had a terrible first inning and a terrible fourth inning. But the kid fresh up from AA making his major league debut in the Bronx also pitched two 1, 2, 3 innings and a third near 1, 2, 3, inning (except for that little solo homerun thing, D’oh), striking out Derek Jeter and Mark Teixeira in the process. Was it an awe inspiring debut? No, but I do think the kid shows promise. Tyler Chatwood’s debut was much the same and he was another bright spot in this series.

Angels bats were a frequent high point – Bobby Abreu, Peter Bourjos, Torii Hunter, Maicer Izturis, and Mark Trumbo all hit well throughout the series and others had hits. If only they could have hit consistently with runners in scoring position throughout the series, this could have been a different post. But at least the fought back this series. No, we scored our three runs in the first two innings and couldn’t possibly score any more until tomorrow. That was a positive…that and two homeruns off Mariano Rivera. Hey, we take our giggles were we can. 😉   Angels fielding was also stellar this series and errorless, except for that one really, really big one…see previous conversation. *sigh*